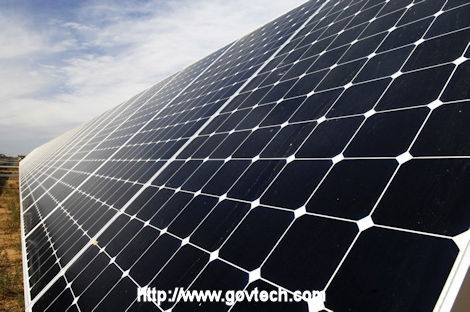 Research by the US Department of Energy has established that a sustained DC arc in a Balance of Systems (BoS) connector results when the junction temperature reaches 200 Celsius.

The rate of arc faults of junction boxes and connectors of solar system BoS connectivity is increasing as systems corrode with age and power density increases. 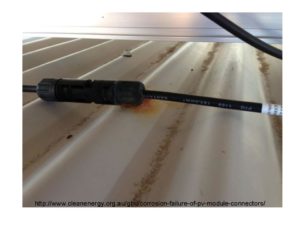 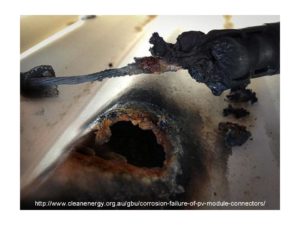 A major problem associated with solar connectors, modules, and other system components is that corrosion leads to electrical overheating that results in DC arcing, causing electrical fires. The arcs consist of intensely hot plasma that ignites adjacent landscaping or building materials, which tend to be highly flammable. Due to the danger of fighting live electrical fires, buildings with solar arrays are often left to burn until they self-extinguish.

DC  arcing, caused by ohmic heating in solar panels and wiring connectivity, is increasing as systems age and power density increases in new installations. DC arcing ignites the module or wiring in an instant, making arc fault detection a problem as the fire continues after the arc strikes.

When the arc strikes, the polymer of the connector ignites in an instant. The arc continues until the circuit is disrupted. The fire quickly spreads to debris, modules, and other flammable structures. 650W modules and 1500V connectivity are installed today.

Solar arc faults have been determined serious enough that in 2014, the National Fire Protection Association added Article 690-11 to the National Electric Code that requires that PV systems have arc fault detection and power interruption:

All solar arrays shall have the ability to detect and interrupt arcing faults resulting from a failure in the intended continuity of a conductor [wiring], connection, module [panel], or other system components.

Photovoltaic systems with dc source circuits, dc output circuits, or both, operating at a PV system maximum system voltage of 80 volts or greater, shall by protected by a listed (dc) arc-fault circuit interrupter, PV type, or other system components listed to provide equivalent protection. The PV arc-fault protection means shall comply with the following requirements:

U.S. federal, state, corporate, and individual consumers (and consumers around the world) have a growing appetite for “getting off the grid” with solar technology. The solar energy sector represents an attractive opportunity for investors because, according to the U.S. Department of Energy, the growth rate of the U.S. market for photovoltaic (PV) solar in 2012 and 2013 has been over 43% annually and is expected to continue at this pace for the next decade.[1] The total U.S. solar PV market in 2013 was 4,751 megawatts of solar electricity, representing a 41 percent increase in deployment over installation levels in 2012, reflecting 14% of the total global solar PV market.[2] By the end of 2014, cumulative PV capacity in the U.S. reached 178 gigawatts (GW).

Solar arrays being installed today have no built-in protection from the fires and human injuries and death caused by direct current (DC) electrical faults, which have burnt down numerous buildings.[3]

Currently, PV system installers have few product options to choose from to comply with the new NEC requirements. One option is micro inverters which convert DC to AC on the panel with costs starting at $89 per panel.[5] Generally, these are 20 solar connectors in a residential solar array, resulting in a $1780 overall cost increase. A second option is a combiner box containing arc-fault detection, which costs at least $1800 in today’s market. Neither of these options focus on the problem of pre-detecting arcing in the connector, which continues until the sun sets. These products do not detect arcing in the connector and do not eliminate the danger of fire and the human and property hazards that result in liability to installers, manufacturers, and insurance companies. The existing products only shut down entire systems after an arc has occurred in the junction box or in the wiring that goes to the combiner box.

GSI’s Solar Guardian® product line offers a unique, patented, low-cost solution to the problem of arcing faults that meets the NEC code requirements of detection before the arc occurs. The Solar Guardian does not shut down the entire array, but prevents fire damage and human disasters by shutting off only the defective connector or string of connectors and alerting the consumer for maintenance. GSI’s business model is to generate revenue streams from product sales from this massive market opportunity.

In 2014, a government national laboratory evaluated the unique ability of Solar Guardian to detect and take action to prevent DC arc-faults in connectors long before they cause damage.

GSI’s patented technology solves the problems experienced by both categories of competition by monitoring individual connectors and cabling infrastructure to detect corrosion and resistive heating conditions before occurrence of an arc-fault. If the condition is located in an individual panel, Solar Guardian® Junction Box takes the single defective connector offline, leaving the rest of the array active and thereby continuing to produce electricity for the customer. If the condition is located in the cabling infrastructure, Solar Guardian® PV Connector will take itself and the offending cable offline in the event over heating is detected. The Solar Guardian® Applique offers a viable, inexpensive solution to detect overheating of conductors and shorts to the frame.

Monitoring for situations that will lead to fire damage and life threats is very cost-effective compared to loss of power generation due to shutting down entire arrays and the massive cost of rebuilding after fire damage has occurred; including the resulting insurance costs for injuries or death and destruction of property.

Another major advantage of Solar Guardian line of products is the ability to alert the consumer to quickly replace a faulty connector, thereby restoring the PV array quickly to full efficiency. This proactive capability prevents fire damage and minimizes equipment losses and downtime, providing peace of mind to customers.

For information about licensing this technology, contact Guardian Sensors, Inc.